There are a lot of memories here. Which makes it a great place to make your own memories. 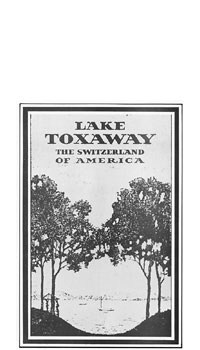 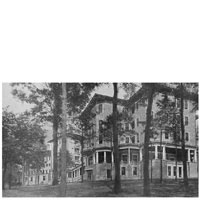 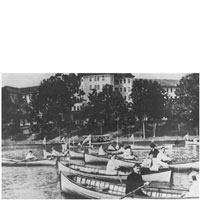 Canoe regatta at the Toxaway Inn 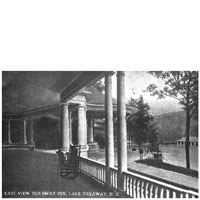 The massive veranda at the Toxaway Inn

When George Vanderbilt arrived in the mountains of western North Carolina to build his magnificent Asheville estate in 1889, he was just the most visible of a new kind of visitor to this rugged land. Wealthy families from all along the eastern seaboard and Midwest were discovering what some came to call "America's Switzerland," famed for its fresh air, scenery, and solitude.

J. Francis Hayes, a Pennsylvania industrialist and entrepreneur, was one of those who came to the mountains for the healthy climate. After his first visit in 1890 he was so captivated that within five years he had formed the Toxaway Company in order to develop the area into a vacation destination. He soon became an area institution, forming not only the Toxaway Company but a tannery and a lumber company in addition to purchasing the Brevard-Hendersonville Railroad and becoming president of the Brevard Banking Company.

In 1896 the Toxaway Company built Lake Fairfield and the accompanying Fairfield Inn, followed the next year by Lake Sapphire and the Sapphire Inn. Both of these projects were of considerable size and scope, but larger still was the plan to construct a lake on the Toxaway River. In 1902 clearing and construction began, culminating the next year in a lake three miles long and one mile wide contained by a 60-foot high earthen dam. Overlooking it was the Toxaway Inn, which boasted, depending on which historical account you choose to believe, from 150 to 400 rooms. It was indisputably a magnificent hotel, framed by a wide veranda and outfitted with the most elegant furnishings and modern conveniences available.

The nation's business elite, including Henry Ford, Harvey Firestone, Thomas Edison, R.J. Reynolds, and George Vanderbilt himself, flocked to the hotel. At its peak, four trains daily ran from Brevard to Lake Toxaway, bringing vacationers who stayed for weeks at a time. 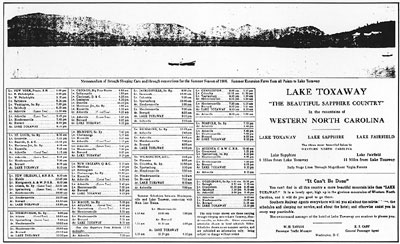 In 1911, Pittsburgh banker Edward H. Jennings, one of the Toxaway Company's largest shareholders, purchased the entire company and in 1913 the company was officially dissolved. Jennings became increasingly involved in developing individual homes around the lake. But in August of 1916, disaster struck.

In July of that year, much of western North Carolina experienced catastrophic flooding. By August, the swollen rivers and creek beds were straining the dam at Lake Toxaway to the breaking point. It was obvious that the dam would eventually give way, and on the evening of August 14, it did. Over five billion gallons of water are estimated to have burst in a wall of water, uprooting trees, displacing massive boulders, and changing the landscape in its path. Despite the water's fury, the only reported casualty was a blind mule.

Any efforts to rebuild the lake were hindered by the disastrous drop in tourism revenue and dashed by the Depression. By 1947, the inn had been bought and was, over the next year, stripped of its furnishings and finally demolished. In 1955 David and Bertha Cosby began buying thousands of acres around Toxaway Falls and developing homesites.

In 1960 the Cosbys sold the property to Lake Toxaway Estates, Inc., which announced that the lake would be restored with a new dam, motel, and golf course, among other improvements. The next year the lake was filled and the company renamed Lake Toxaway Company. Thus began the renaissance of one of America's most famous, then virtually forgotten scenic areas. Today Lake Toxaway is again a favorite, not only of the wealthy but of people from all walks of life.